Boeuf Bourguignon.  Or as I say, "Buff B-b-buh... What is it, Dan?"  And then he pronounces it correctly for me.  French is a language that I hear, but there's absolutely no connection between my brain and my mouth.  None.  Nada. Niente. And thus concludes the languages my mind can process.  No matter, this is a meal where there are no words needed 'cause everyone's too busy stuffing their faces.

Speaking of stuffing faces, I'm so excited that I will be co-hosting this very special Fiesta Friday with the lovely, talented, and most hostful of hosts, Nancy @ Feasting with Friends!  What makes this FF so special?  Well not only is it the big Six-Oh, but it's also the first in our new party hall at FiestaFriday.net!  I was beginning to wonder when Angie was going to get sick of us all at her place 😉

Anyway, back to the Buff Bhbhahlagnon, it's just a pot full of some of my favorite things : bacon, beef, mushroom, onions, carrots, celery, and winnnee.  'Cause you know the saying is true, I love cooking with wine, sometimes I even put it in the food!

And yes, I did use canned tomato paste.  Because even though we can make our own, it is one of the few things that I've learned just isn't worth the time (to me) to make from scratch.  I once bought 25 lbs of tomatoes and it made me only 4 pints of paste, two of which I lost in the canning process.  So, 25 lbs = 2 pints over the course of a weekend = why it's now one of the few things we will buy pre-made.  My tomato paste making spirit is broken...

But back to the pot of my favorite things.  First favorite: bacon.  Some nice thick cut bacon diced and into a stainless steel or cast iron pan.  This is important.  No non sticks for this process, you want all goodness to stick in the pan- you'll need it later.

While those babies are frying up nice and crisp, I sliced the onion,

Once the bacon was done and my husband was salivating because the house now smelt of nothing but bacon, I removed it from the pan and kept about a half a tablespoon of the grease in the pan and set the rest aside to use later.

Then, it was time to sear the meat.  I'd found a chuck roast on sale one day at the grocery store so I bought it and stuck it in my freezer thinking, "I'll find a good use for this later,"  Yup.  After I cubed the meat, I patted it with a paper towel to remove any excess moisture, then I salted and peppered the pieces.  The Kitchn has a great article on searing meat- totally worth the read if you're a meat searing newbie like me.

Then removed from the pan into a bowl.  And this is where the non stick pan is important. 'Cause you're gunna wanna deglaze that bad boy with some of your wine.  I chose Tesoaria's Tempranillo.  1. Because it's really the only wine we drink in our house these days 2. Because I had opened this bottle two days prior and only had a 2 glasses out of it. It was still good, but not great like the Tempranillo is the first day.  I know- I opened a bottle and didn't finish it.  Sometimes I just don't recognize this Tracy in her 30's... 😉

All that deliciousness deglazed...

...then got poured over the already cooked meat.

And then repeated until the rest of the meat was done searing.

Once I was done, the meat went into a bowl before it gets to go into a pot with the rest of my favorites.

Back to the pan of delicious coatedness, I added more of the bacon grease and then the onions to saute for a few minutes,

and then added the carrots and celery.

Once the carrots and celery were tender, I added the garlic and just a tablespoon of tomato paste and gave it a good stir, cooking just long enough so that I could smell the cooked garlic.

Then, it was ready for the party pot.  I added the beef (with all the liquid) and the veggies,

poured in some of our chicken stock,

and the rest of the wine.

A good mix, a bay leaf, some fresh thyme, a touch more salt, and then into the oven at 300°.  The recipe said 2 hours, or until the meat is fall off the fork ready.

Mine was ready in about an hour and 1/2.

And no, of course I didn't forget the mushrooms and the bacon.  They got added to the dutch oven after everything was cooked, and mixed in and heated by the rest of the hot pot of delicious.

Now that is what I call a hearty pot full of favorites.

Just in case the first ladle didn't convince you.

We served this over some simple chicken stock quinoa.  Not like you can see it under this heaping pile.

It was a meal fit for a Frenchman!  Or a  parti!  (I totally googled that). Happy Weekend, All! 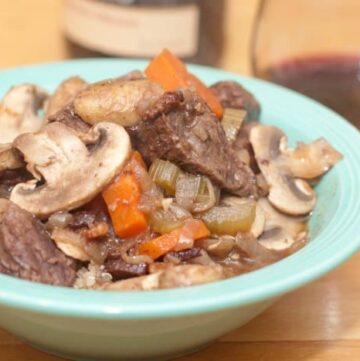 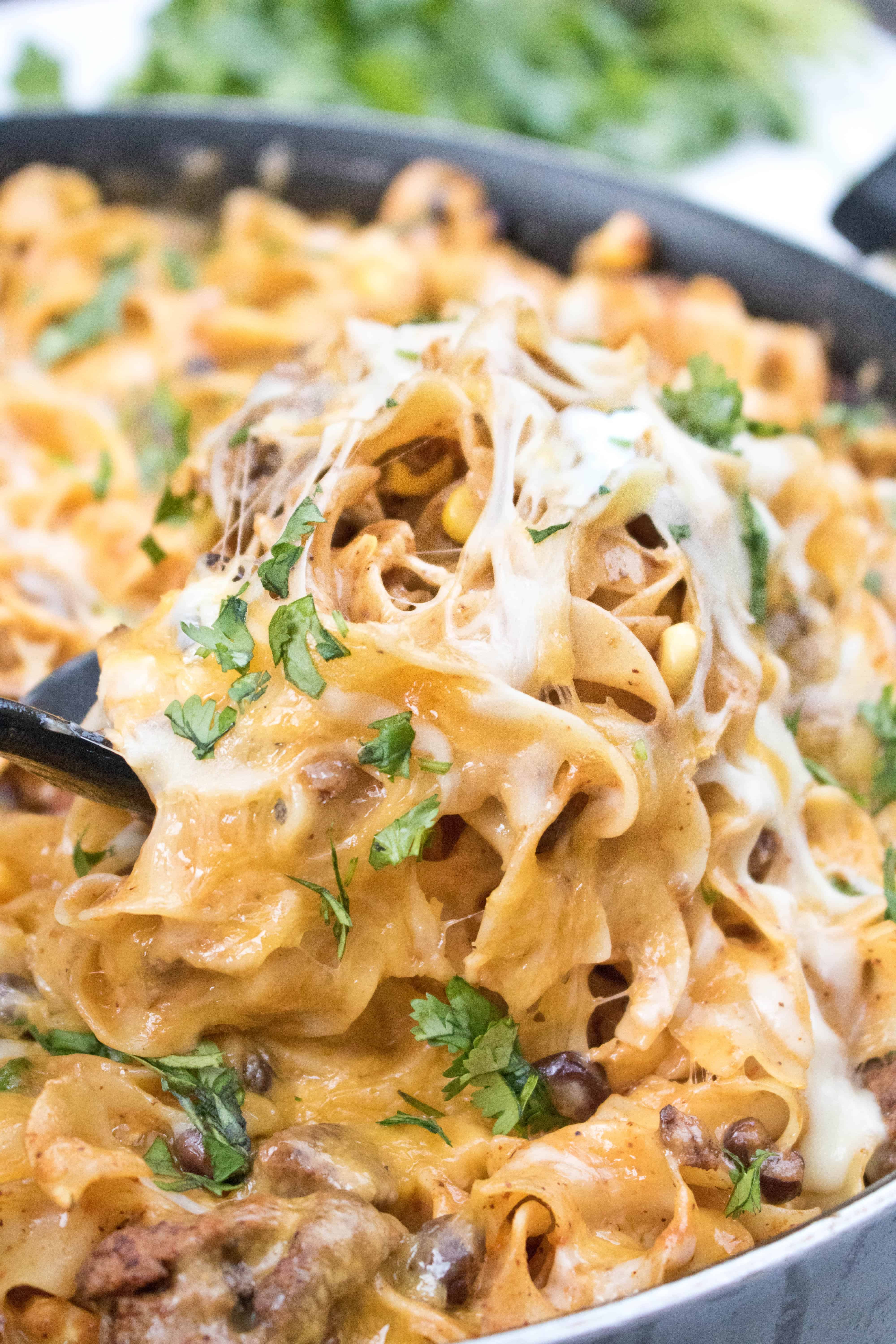