Did you know you can make your own Homemade Chocolate Chips?  It takes some time, but they're a fun project, especially with kids! 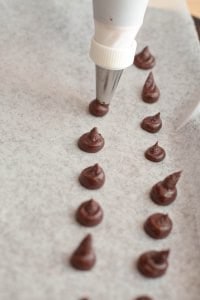 In searching for chocolate chip recipes, there are a lot out there and a lot that seems to have a lot of junk in them like fake sweeteners.  Really?  No thanks.  So, I decided to wing it. From what I gathered,  chocolate chips are just chocolate and something to sweeten it.  You could even use up some leftover chocolate bars that you have and just melt them down! Some recipes added coconut oil in them, but I decided to keep it as simple as possible. Baking chocolate (which is just one ingredient: chocolate), and some raw honey for sweetness.  Wessels Family Honey (made in Forrest Grove, OR), is my new favorite honey; it is soo good.  And local!

The first thing I did was melt the chocolate in a double boiler.

Once the chocolate was mostly melted, I added the honey.  I think I added about 2 1/2 Tablespoons of it, give or take a 1/2 tablespoon...  At this point I decided to add some vanilla too, so I added about a teaspoon of homemade vanilla extract and mixed it all up.

You know what's on my list of things to buy? A good pastry bag.  We don't bake a lot to really warrant having one, so it's at the lower end of that list.  But last night I really wished I had one. Instead, I used a freezer bag and cut an edge off. It worked, but it wasn't the most efficient way to do it.

On a parchment paper lined baking sheet with my makeshift pastry bag, I plopped out these little bits of the chocolate mixture.

The 'plops' from the 'pastry bag' weren't as nicely shaped as I wanted so after I filled a tray I just gave each plop a little pinch with my fingers to shape them.  This took way too long.  And it was kind of annoying. Ok, it was really annoying, but once I started, I had to finish since I'd invested so much time already.  Next time, I'm going to make chocolate chunks and just pour the hot chocolate mixture down on the parchment paper, stick it in the freezer to harden, then break off chunks. For now, I just stuck these individually shaped chocolate chips into the freezer on the tray.

Even though they were kind of a pain to make, look at how cute they are! I didn't get as much as I would have liked, (I blame the crappy pastry bag), but again, it was a total experiment. Next time, I'll use more bakers chocolate.  But, for now, the next time Dan has a chocolate chip cookie craving, we have a bag of semi-sweet from scratch chocolate chips waiting to be used in the freezer.

Update: November 2014, I finally had a pastry bag to use!

Definitely a much easier process!