Homemade Sourdough Herbed Croutons are the easy, healthy, way to not only make your own homemade croutons but also how to use up some old homemade bread!

I've gotta say it out loud- I've been blessed with an amazing mother-in-law.  As I type this, she's entertaining herself in our backyard cleaning out the overgrown garden boxes we received with the rental of our little house. And I don't mean just pulling weeds; she's taking every last root out of those suckers and getting them ready so all we need to do is plant our veggies.  Ah-mazing. Even cuter, M-Law asked me if it would be ok if she played in the dirt while the hubster and I were at work, to which I said "Of course!", and to which she then asked a few more times just to make sure she wasn't being rude or stepping on any toes.  Ah-dorable.  And no, really, she wanted to!  I swear that I didn't fly my MIL all the way out from Virginia for a 'vacation' where I then forced manual labor on her; that's how green her green thumb is!  Mama Gail looovvveesss to garden!

Which brings me to these croutons. M-Law also loves herself some fresh veggie packed salads, and since she too makes her own breads and cooks from scratch a ton (um, she took my homemade cream cheese to the next level and made it into a cheesecake!), I had to make some croutons while she was here to direct me!

The best part about these croutons is you can literally make them with anything you want.  Any type of bread, any type of hebs or spices or salts and even sprinkles of some cheese.  We had some homemade sourdough bread on hand, some parmesan, pink himalayan salt, and some herbs de provence that our friends had brought us from Paris last year.

So  I sliced and cubed a couple of slices of Dan's delicious sourdough (this particular loaf had a little extra baking time, as seen by the slightly burnt bottom, so it was perfect!)

on to a baking sheet drizzled with olive oil (if I wasn't preparing my waistline for a few upcoming summer trips I would have totally used butter instead...)

Then sprinkled with about a teaspoon of salt, tablespoon of the herbs de provence, and then just a light dusting of parm. We just wanted a super subtle nutty flavor from the parm, but you can add even more to make them cheesier.

Then they went into the oven under the broiler for just a couple of minutes until they start to brown. For even browning I gave them a little flip,

until they were to a level of golden and crispy that looked good to us.  Totally a preference thing. Had they been just for me, I probably would have let them brown even longer.  But I also a weirdo who preferred almost burnt toast as a kid.

Pop these guys on a super hearty bed of greens and veggies and that's a salad.

Plenty for salads for the rest of the week, too!  And thanks to all the hard work by Mama Gail, this summer we'll be enjoying truly from scratch salads with all the lettuce and veggies we're going to have in our weed-free garden beds and now, some Sourdough Herbed Croutons, too! 🙂 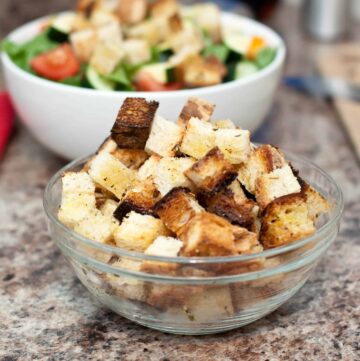 Homemade Sourdough Herbed Croutons are the easy, healthy, way to not only make your own homemade croutons but also how to use up some old homemade bread!
0 from 0 votes
Print Pin Rate
Course: Salad
Prep Time: 5 minutes
Cook Time: 5 minutes
Servings: 8 cups
Author: Tracy