Tahini from Scratch can be made in less than 15 minutes and with only 2 ingredients! Plus, it’s so much more affordable than store bought! A couple of years ago when I started making my own hummus I went to the grocery store in search of tahini.  But I had no idea where to look, so I asked the first person who worked there that I saw where I could find it. They looked at me and said, “What’s tahini?” Which at first I thought to myself, what do you mean what’s tahini, but then I realized I had no idea what it exactly it was made of myself.  I literally could not describe it to the person aside from, “It’s in hummus…” So, that day the store clerk and I learned that tahini is just a sesame seed paste and that in this particular store it could be found with the organic peanut butters. Flash forward a couple of years and tahini was the first condiment I’d decided to make when made the From Scratch cooking lifestyle change.  Then, and still now, I’m shocked at how easy it is to make and how much I’d been spending on it in the store! Seriously, when I say simple, I mean simple.  As simple as heating up some olive oil, toasting the sesame seeds in said olive oil… …then blending in a food processor with more oil until smooth. Then into a jar and you’re done.  Seriously, done!  Mine is a little less creamy because I choose to use raw un-hulled sesame seeds.  If you use hulled sesame seeds it’ll make a creamier tahini, but the un-hulled are seeds that still have their shells and in those shells lies a ton of calcium.  I’ll take more calcium over a super creamy any day.  Otherwise, there’s no difference in taste. This jar will keep in my fridge for 6 months and will be used for tons of hummus, tahini lemon dressing, baba ganoush, and totally on my must make list are the amazing looking Falafels that my girl Stephanie @ The Cozy Cook made.  It’s such a versatile condiment to have around and just as easy as homemade mayo and ketchup– and cheaper too! That’s a win-win in my From Scratch book! 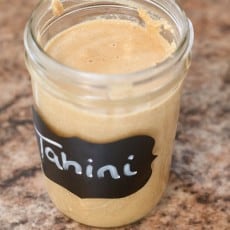 Tried this Recipe? Tag me Today!Tag me @ServedFromScratch or use #ServedFromScratch!
541shares
Previous Post: « Garlic and Gruyere Roasted Asparagus
Next Post: Pita Bread and Pita Chips from Scratch »