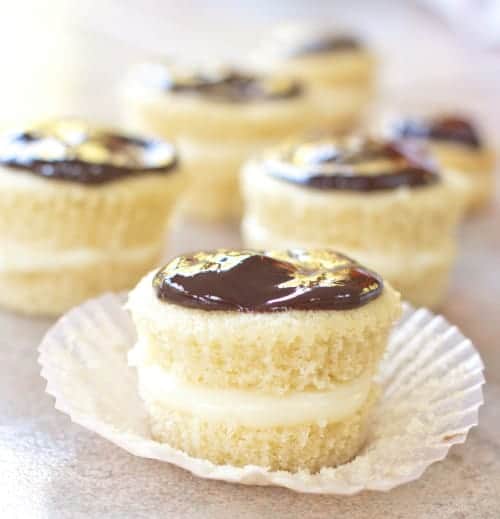 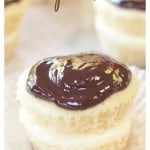 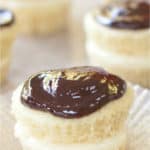 Helllooo from the quaint, white steeple church-ed, rolling hills, of New Hampshire!  I’m here in my hometown with my mom helping her recover from a surgery.  All has been going very well ’cause, well, it’s my mom and she’s kind of a strongest woman I know.  So while I’m here, I’m cooking anything she or her other half wants.  When I posed the question of what a favorite dessert was, one of the (many) answers: Boston Cream Pie.  Something I’ve never made before!  Done.  But since I didn’t want to make a whole cake, the answer: Boston Cream Pie Cupcakes.  Because let’s be honest, the answer is always cupcakes. Mmm.  Totally delicious enough to eat by the spoonful on its own (speaking from experience). Next, the cake.  Super simple.  Don’t worry – if you don’t have buttermilk, you can make your own in just 5 minutes! …and baked for about 18 minutes. With the adorable cupcakes the pudding all set for the center, all I needed was a delicious chocolaty ganache. What’s a ganache? Basically just chocolate and a fat.  In this case, heavy cream and lots of butter.  Low fat, of course 😉 Then it’s just slicng the cupcake in half, adding a dollop of the vanilla pudding in the center, then topping it with the chocolate ganache. Success! Boston Cream Pie Cupcakes made From Scratch.  Be sure to grab a napkin with these guys, they’re ooey gooey messy delicious! 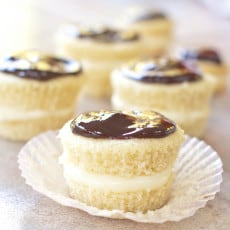 To make the Ganache