Spinach, Ham, and Cheddar Quiche, the perfect breakfast, brunch, or even dinner meal.  It’s everything you need in one delicious pie dish!

I don’t know where it came from or why, but I had a serious hankering for some quiche.  Specifically a Spinach, Ham, and Cheddar Quiche.

I can’t even remember the last time I had a quiche, never mind make one.  But since we had a ton of leftover ham that needed to be used, some spinach, and of course we always have some extra sharp cheddar in our house, we were all set for a Spinach, Ham, and Cheddar Quiche!

So have I mentioned lately how studly my husband is?  He has his own, memorized, go-to pie crust recipe, which he whipped up and put in the fridge to rest before heading to the gym the other night.  I love that man.

He is totally the baker in our house, not me.  I usually leave the pastry making up to him so I was going to wait for him to get home to roll out the pie crust like he so expertly does.  But then I realized after that it would have been over an hour before it’d be done.  So rolled it out myself.  Which turned out not nearly as pathetic as I thought it would!

Edges trimmed and baked for 10 minutes, and hey, it actually looks like the pie crust!

While it cooked, I put together everything else.  I chopped up the last of this ham which I thought would have been perfect in the quiche.  Right after Easter, spiral cut hams went on sale at our grocery store for .49 cents a lb!!  I know.  So I bought three and put them in our freezer.  It’s been the most amazingly cheap but delicious lunch meat for some hearty ham and cheese sandwiches. .Sooo much better than the $8 a lb we would have otherwise spent on deli lunch meat!

Then a dice of half a white onion and some garlic into a pan with some spinach for a quick saute.

Then a super hearty whisk of eggs and milk

and then the sauteed goodness mixed in with the eggs and a cup of shredded cheese all poured into the pie crust,

And we’re in business.

In the oven for about an hour, and we have this Spinach, Ham, and Cheddar Quiche deliciousness.  Ham, cheddar, spinach, and cheese all baked into a buttery flaky pie crust?  Yes, please!
Yummm.  Some people say to layer the ingredients, I like to have them all mixed together. 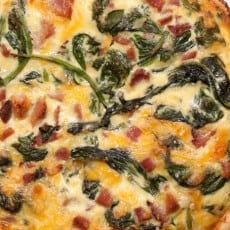 Everything you need in one delicious pie dish!
4 from 35 votes
Print Pin Rate
Author: Tracy 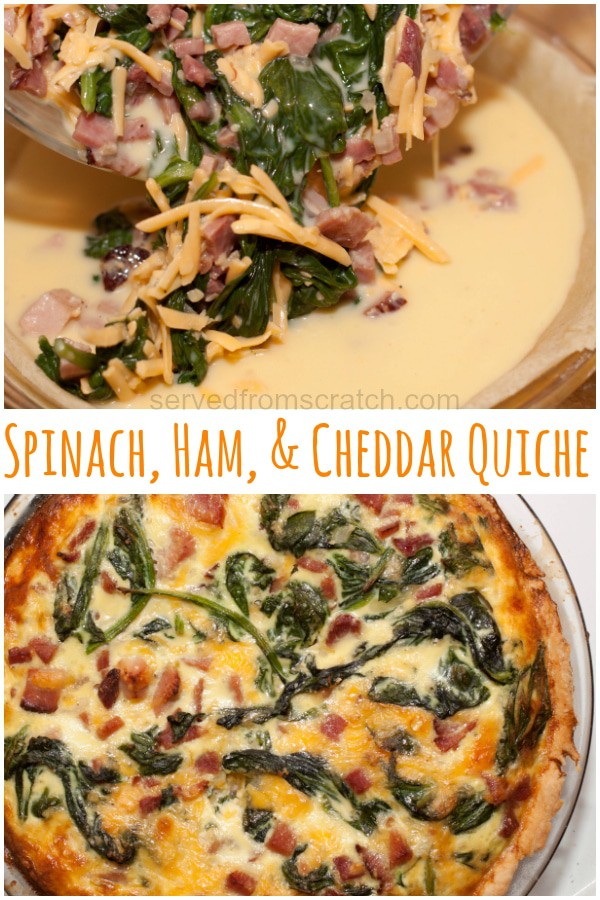